I was more than bummed to not be able to race this past weekend at the US Cup Fontana race.  On the other hand its very exciting to be able to eat again.  Last Tuesday I came down with what I originally thought was food poisoning, after a horrible 24hours the symptoms didn’t fully disappear and I was still feeling pretty crappy.

By the time Friday rolled around, the day before the race, I had only eaten about a days worth of food in 4 days time.  I didn’t have much energy and eating anything other than applesauce, bread or white rice scared me.  Except sushi, I had sushi twice, and it was awesome.  My glycogen stores had to have been completely annihilated, and after a crappy 1hr bike practice on Thursday, that I barely got through, I decided not to race.

It was pretty crappy to make the call, but I think it was the right decision, I was still a little dehydrated and had no energy, I for sure would have been in the ambulance getting an IV halfway through the race.  I thought about toeing the line just so I could get an IV going, but later decided against that.

I still went up on Saturday to watch some of the worlds best do what they do, and worked the pits for a friend in town racing from Colorado.  It was good to see and talk to some of my friends (sponsors) some too, without al the pre-race jitters.

I was able to get a halfway decent ride/workout in on Monday and think Ill be sharp enough for the next bit of racing coming up in a couple weeks.  Heres to eating!

#MTBishere, like full gas here. This last weekend was the official kick-off for the mountain bike season with a UCI C1 race at Frank G Bonelli park in San Dimas, CA. San Dimas incorporated as a city in 1960, and is known for its small town and equestrian qualities. I think that in the future it will also be known for hosting world class mountain bike races.

The course at Bonelli isn’t fun, its just plain hard. If you were to go riding with your friends you probably wouldn’t ride the majority of the course if you were looking for enjoyment. This years course was slightly modified and slightly shorter with the lap times going down to 12 minutes for the top pros (I think 11:51 was actually the fastest time).

I swear this is steeper than it looks! Photo: Focus Bikes

Drink water on the flat concrete part going through the start/finish, climb a 20% hill, go down some rocky technical descent for about 5 seconds climb another super steep hill, go down a concrete like rock garden with baby heads for about 5 seconds, ride some flat-ish awkward bumpy singletrack, punch up a short steep hill, go down a blown out left hand turn, climb then climb more up some absurdly steep 20%+ hill, go down some blownout descent for 5 seconds, climb (the most enjoyable climb on the course), probably still climbing, think about going downhill, but you actually just start going up hill again, go through a couple turns down a hill for about 5 seconds, climb the longest steepest (newest) hill, curse yourself for running a 36t front ring, go down a super steep blownout descent trying to act like you are in control for about 5 seconds, hit the A-line, bunny hop three times, climb another steep thing, think about going downill but start climbing again, do some turns in the grass and you’re back at the start finish.

That’s it, that’s all there is to it. Given the large field of 119 riders, the short lap times and starting near the back it was really just a race to see how many laps you could get in. There was a bit of a hold up initially at the start that pushed me back a little further, but I was probably somewhere in the top 80 or so after the short parade lap.

It takes an army…

I suffered as much as I could and kept moving up whenever possible. It seems stupid to say Im just using this for a training race, usually only the top guys use races this big to train through, but I know I’m not gonna pass 80 pros to get a top 15. Not really sure where I finished, or even what lap I was pulled on, but it was so hot and miserable I was glad for it to be over. Huge shout out to everyone who raced Saturday it was freakin hard and miserable. I’m glad to get the first big race out of the way!

Drive 3+ more hours for 15mins of racing on Sunday or just do this? I did this with the family

This next weekend is going to be even harder as literally the best mountain bikers in the world are coming over, Im talking Nino Schurter and possibly Juilen Absalon, holy cow!

While it wasn’t technically the season opener since the Quick N’ Dirty kicked off the weekend before, this last weekend at Vail Lake was one of the first ‘larger’ races.  It brought in a bunch of big time talent from a few different states (and Canada) and was sure to be tough and fast.

When it was raining in Cardiff at 8am (it was actually raining, not like our usual ‘rain’ days) the morning of the race I had kinda made up in my mind that there would be no race.  After texting a few friends and my traveling buddy Ben Jones it looked like everyone was still going out to the venue cause it was maybe gonna clear up later.

So off Ben and I went driving rainy roads in the 1996 Chevy G1500 completely equipped with mood lighting, an excellent choice for muddy bike races.  When we got to the venue it was still raining and we decided to go check out how wrecked the other racers bikes were getting from the mud.

Ben got me with the free candy

This is just the beginning of the season, the possibility of how wrecked your bike would be after the mud was really a big turn-off for me to race.  The mud here is like cement after it dries, and is capable of ruining anything in its path.

But we decided at the last minute to go for it, saying something like ‘this is what makes memories.’  I got in a horrible warmup of about 10 minutes on the pavement, got to the start line late and was in the last row of a crowded field, and had no idea how the course was, proper professional preparation(PPP for future reference).

After the start we hit a single-track climb and I was taken back at the skill level of some of these ‘pro’ mountain bikers, or lack thereof.  After getting around some other riders I was still pretty far back and the lead group was gone.  My main goal for this race was to get into the front group, which I was guessing was going to be about 5-7 guys, but that didnt happen. 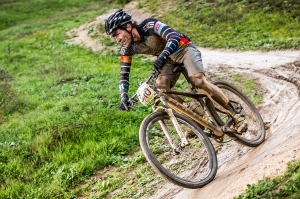 After the first lap I was seriously thinking about dropping out because of the conditions, but I figured my bike was already kinda f*cked, and I wanted to make sure to get a workout in so I kept chugging along.  I was getting into a better groove, with the mud and all, on the second lap.  I was used to having mud in my eyes, and not being able to see, and now knew the course.

It also stopped raining on the second lap, which is when mechanicals started happening.  The mud started to dry out some and became more of a peanut butter consistency.  It was so goopy that it was jammed in between the links of my chain and would just push itself right off of the chainring.  I would seriously stop, put the chain back on the chainring turn the pedals and it would just hop right off.  After some cleaning with the water bottle I was finally able to get going again, probably loosing about 4 minutes in all on lap two.

I wore a cap in the hopes of keeping the mud of my face and out of my eyes, it didn’t work. Photo PB Creative

By the third lap I was grooving, I learned the mud and the course, the trick was not to touch your brakes, ever.  The mud was so slow there was no need to! I managed to catch one rider on the last lap and finished 10th.  Not at all where I wanted to be but its mostly my own fault for the crappy warmup, late start line position and lack of initial motivation in the rain(PPP).  On the plus side I had one of the top 4 or 5 fastest last laps, I never felt tired during the race and know that the race fitness is coming in a month or so, so thats good, just have to be patient.

I raced my hardtail (Focus Raven 29) at this course because of the lack of technical sections, but considering the mud I don’t think a full susp would have been a disadvantage at all.  I ran my regular dry fast course tires, Kenda Small block 8’s, down at around 21/23 psi and they worked surprisingly well.  The main thing they lacked in the mud was rear wheel traction up steep climbs, which something like the Karmas, or Honey Badgers would have been better at.  At the last minute I also cleaned the crap out of my chain and applied WD40’s wet lube, and it worked great in the muck, there was nothing any lube could have done to keep the chain from poping off the ring.

Since the race I replaced my BB bearings as the drive side was completely frozen, top headset bearing, and brake pads since they were literally true metallic pads.  I have completely disassembled the bike cleaned it and put it back together, its the only way to try to make it feel like it wasn’t just destroyed.

There was a braking surface here…

Other racers reading this, what tires/pressure or other modifications did you make for this mud race?