24 minutes and 5 seconds, thats how long I just rode my bike for.  Nationals didnt signal the end of CX season like it did for most of my other friends, I called it a wrap back in December and have since been building base for the MTB season.  Thanks to the good ol Flu though I just had an unscheduled two weeks off of the bike, and today (1/18/15) I rode my bike for the first time since racing down in Austin.  It felt weird too, being that I’m not fully recovered my balance was off and I kinda felt like a Fred out there, good thing I kept it short.

Since I am going to take cyclocross a little more seriously next year, I figured it would great experience to go get the feel for a national championship race.  So Tony Smith from BookABikeMechanic.com offered a service for local riders wanting to race in TX.  He rented a trailer and we hauled 12 bikes out to Austin and provided a base camp for a handful of other SoCal cross racers.  It was a blast hanging out with everyone the whole week, and I really do think everyone had a good time.

Fun in the pit on Friday. Rule: Dont lock your bike up in the pit

We blasted through the drive in two days as there really isn’t anything fun to do, or anything to eat/drink, other than some truck stops in west Texas.  We were fortunate enough to have a homestay with a (now) good friend, Brian Leib, in Austin.  We were pretty busy everyday, whether we had guys racing, or we were getting organized for the next day.  Constantly building/tuning bikes, gluing tires, helping out passerbys, swapping wheels, checking tire pressure, cleaning, looking for food/coffee etc…  There weren’t really too many dull moments, which made the time fly by. 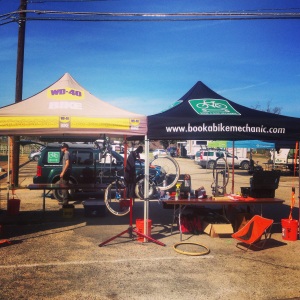 Home base, before the weather turned and the walls had to go up

I entered the SS race on Wednesday with a “great” callup of about the 6th or so row out of 158ish total riders.  After the whistle my buddy Brandon had come from about two rows behind me and ended up in front of me about 2 minutes into the race.  He was maybe a little over excited and took out a bamboo stake and tasted the dirt shortly after passing me, leaving me to race by myself.  I just constantly worked my way from one group to the next until the short 40min race was over and ended up somewhere in the top 15. 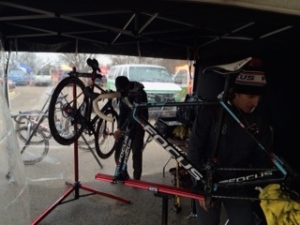 I got a solid 3 hour ride in the below thirty degree weather on Thursday, and we had a busy day on Friday of pitting for about 7 riders.  It was a long day with a lot of walking and bike tuning.  I know Tony and I were secretly hoping it would be muddy and messy to make the pits busy.  But everything went off without a hitch and with no mechanicals or bike changes necessary. 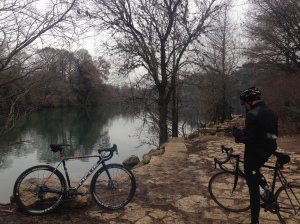 No shortage of clear water in Austin

I kept it pretty easy on Saturday, and woke up ready to race on Sunday.  Shortly after eating my pre-race breakfast we learned that the races for the day had been cancelled.  Later we learned, that after rerouting the course to appease some local tree huggers, the race was rescheduled for Monday.  This was brutal, I had already been away for eight days and was pretty ready to be back in Socal’s perfect weather (and get back to work).  I was able to move my flight from Monday to Tuesday so I could toe the line on Monday with the countries best.

Cleaning after a muddy pre-ride

I woke up slightly under the weather with a cold moving in on Monday morning, but the course conditions, i.e. MUD, were too epic and I have been through too much to not race now.  Somehow my callup had been change from around 40th on Sunday to 58th Monday, I have no idea why this would have even been different.  On Monday morning I tried asking many USACyling officials why this could have happened and if it can be fixed, but couldn’t get a straight answer.  I wasn’t gonna let this bum me out so it was back to the last row I go!

There had been a couple pileups at the start of races over the week, something you need to know that is possible in the back half of the pack.  Sure enough one minute into our race when we were still on the pavement I noticed something amuck ahead of me on the right side.  At first I thought to myself no, this doesn’t happen in the elite race it will sort itself out.  But it didnt, I slowed and was looking for a way out on the left side hoping to maybe even get a few spots if there was a wreck.  Just as I was doing so some dude slid into the left of me causing me to pretty much stop.  I kinda hoped off sideways head butting Brady Kappius in the back, but safe and on my feet.  The dudes front wheel that took me out decided it was hungry and ate my rear shifter.  Luckily we were both calm about the situation and took 10 or so seconds to calmly untangle our bikes.  Besides Brady who had a tacoed rear wheel, I was dead last getting onto the grass.

The course was supertechincal with all the off camber turns and slick mud.  I rode super sloppy the next two laps, with my wits not really about me cause I felt like I needed to get back spots.  And it wasn’t until the last lap I started to find a groove.  Anyway finished 38th which isnt where I wanted to be at all, but this was all about the experience anyhow.

I was finally able to enjoy some drinks and live local music that night, before my flight out with Fluffy and JRowe the next day.  All in all Austin kept me on my toes, provided me with no shortage of good eats, and got me sick for two weeks afterwards, it just keeps on giving!