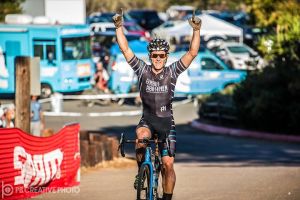 This past weekend was a local CX race at lake hodges known as ‘Udo Cross.’  It is dedicated to Udo Heinz, who was killed by a bus while riding his bike on Camp Pendleton a little over a year ago.  He was a member of the ranchos cycling club, who organize and put on the race, and passionate about cyclocross, and his race at lake hodges.

This is a race I have wanted to win for a while, and being that this was the state championships I was a little extra motivated.  I will never forget my first race at Hodges, three years ago.  I was in the hurt box and in a possible podium position, and really felt like quitting, but Udo cheered and urged me on.  I felt like he wanted me to win more than I did and I thought I can’t let him down, and ended up pushing through and ending up third by about a half a second, one of my best races to date.

The course didn’t change much this year from years past, they made it a little easier by taking a couple smaller punchy hills out, and a little less riding around on the beach.  At least the mud ditches were gone those were kinda annoying.  It would definitely have been rad if we would have had to run the entire sand section, but it got pretty packed down as the day progressed, and more riders were able to ride it.

It was really awesome to not have to drive through LA traffic, as Hodges is about 30 mins of back roads from my house.  I got to the venue about two hours before my race and was stoked to hear  that my teammate Danger had won the SS race and claimed the teams first Bear jersey of the year.  No pressure.

Tony Smith of bookabikemechanic.com was hired on to be my race mechanic/pit guy for the day.  For those not in the know he has several years experience as a race mechanic for Rapha/Focus at the highest level of racing, including experience in Europe.  He has pitted for me in the past at MTB races and its amazing the stress that is taken away.  I am very meticulous about my bikes and I able to just sit back and relax and think more about racing cause I know they are in good hands.  It was also nice to be able to get out of the sun in the WD-40 tent and hangout with Liza and hand out some free samples.

There wasn’t much of a need to learn the course since it hadn’t changed much, just some of the turns on the lower half of the course.  I did some warm-up laps and dialed in the bikes with Tony, playing around with air pressure and making some slight adjustments.  It was awesome seeing all my friends that came out to watch and cheer, they even went and made some ‘Elliot heads’…from a Halloween picture that was taken about 3 or so years ago.  I was a dressed as a geisha, they were scary, and funny, but mostly scary.

I finally got a front row call up since I had won the first SPYclocross race in Chino.  I wasn’t too concerned with the hole shot I just didnt want Brandon and Kyle Gritters to be together.  Brent Prenzlow proved that he wanted to lead out the first lap and had a great start, followed by Brandon then myself.  Brandon fudged a remount after the barriers in the sand on the first lap and decided to try to make a sandcastle, giving Brent a good 10 second lead.  I had a small idea that if I could close in on Brent, pass him, then put an attack in on the single track area he would maybe hold up Gritters and some other racers and I would have a gap.

So I passed B. Gritters before the fly over, closed the gap on Brent on the uphill section, then passed him on the descent a little before the single track.  I rode the single track section hard but had barely put anytime on the field, better ease up looks like Im in for a long race.

Never easy to shake this guy from your wheel. Photo: Phil Beckman

I stayed at the front and we rode the second lap pretty fast too, by the end it was just myself and B. Gritters with Brian Gordon and K. Gritters chasing.  There was no way Brandon was gonna pull us around as he wanted his brother there for their tactics, and Brian Gordon also races with Brandon during the MTB season.  I was really wishing my teammate Gareth was around cause it was pretty much a team of three against myself.

I stayed on the front and B. Gordon was able to bridge up in the next lap or so.  Kyle, at one point, was only about 5 seconds behind,  I really didn’t want him to catch on and made the next lap a little harder, putting some time on Kyle.  By this point I think Brandon knew he was on his own so he started putting in a good acceleration down the beach.  I think he got confused by the geisha heads, and all my friends cheering in the sandy corner, and he rode straight into a stake on the apex of the corner holding the course tape. 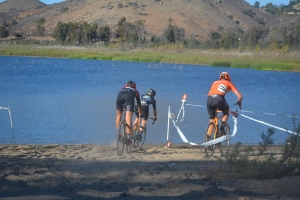 This is not unusual for Brandon as he usually plows through the course tape at least once a race taking out some stakes and tape along the way.  I made my way cleanly around and immediately put the gas on as much as I could hoping he would get tangled up and I could get a gap.

Taking out the stake also took some air out of one of Brandons tires, and he had to pit.  He was lucky he flatted at the spot that he did because he didnt loose too much time on the bike exchange.  Brian came along with me and stayed on my wheel while we slowly chipped away a small lead.  I knew Brandon was going to be chasing hard, so I really had to establish a gap now or it may be game over.  After a couple laps I finally talked Brian into doing some work and he put in a great effort on the hills and we finally had a pretty solid gap.  Still couldn’t make any mistakes as Gritters would be right there.

Brian Gordon putting up a good fight on his birthday. Photo: Phil Beckman

After pulling for a lap, Brian didnt want to ride at the front anymore.  We still had four to go and we had to keep the pace fairly high, so I just rode as smooth as I could.  I could tell that Brian was maybe getting a little tired as his turns were a little sloppy and he had made a few other small mistakes.  I saved as much energy as I could for the last lap then hit it as hard as I could at the start/finish to start my last lap attack.  I got a very small gap as we were going down to the beach, then on the turn around through the sand I noticed Brian was not close at all.  I thought that was weird as I couldn’t have gotten such a huge gap in such a short amount of time.

Turns out he got snagged by some course tap and wrecked hard, cracking his helmet and getting a ride to the ER to be released with a concussion, thank goodness for helmets.  I didnt know until I went by the pits that he had crashed and then was able to ride out the last lap, making sure to make no mistakes.

So stoked to take the bear jersey on my home turf with all my friends there.  My better half, Ellen even made it out with our good friend Tom who had never seen a cyclocross race before.  I really think all my friends cheering made a huge difference in the race outcome, so thanks Gordon, LDub, Fluffy, BMFJ, Two T’s, J. Rowe, Brandon, Eric J, Cliff, and James Glibert (the Geisha head maker) Also, I think Udo would have been happy to see all the people out racing this past weekend, having a good time riding and racing bikes, he was a huge encourager to get people to ride and have fun.

Ive always wanted to do Will Ferrells bit from Taladega Nights where he doesn’t know what to do with his hands when he’s getting interviewed, but not sure if PB would catch that. “If only I could grow a beard…”

A big part of cyclocross is making as few mistakes as possible, and capitalizing, when other racers do.  I made a small mistake at Spooky cross two weeks ago, it probably only cost me 5 seconds at the most, but it gave Brandon the win.  Im super bummed that Brian wrecked as hard as he did, as he was having one of his best races ever, and on his birthday of all days!  Wishing him a quick two weeks off the bike, and some good recovery for MTB season next year.  Im sure the usual suspects will be battling it out up in SLO this weekend for the next round of SPYclocross.  Huge thanks to SPY and Victor for having a legit cyclocross series in Socal.

Good company on the podium