This was my first time actually traveling a longer distance to go race bikes so there was a lot of potential unknown situations that could have occurred, which left me a little more stressed than normal.  For the most part everything went pretty smoothly though.  Gareth Feldstein, aka G-Money or is it G$?, and myself split a car and a hotel room and everything went off without any major glitches.

We got in Thursday night, ate a bunch of BBQ and got our bikes built.  The next day we cruised out to the race venue after some breakfast, registered and attended the riders meeting.  We were able to get a tour of the course with Rich Weis, which turned out to be super helpful.  He had been out there a day or so before and already had all the good lines nailed down which he was kind enough to show us.   We rode the course a few more times going over different lines on all the technical sections.

Texas, yea there are rocks!

After the pre-ride I knew I was gonna be in for some major pain the next day, as the course was so bumpy and littered with loose rocks that a hardtail at race pace out there is just crazy. 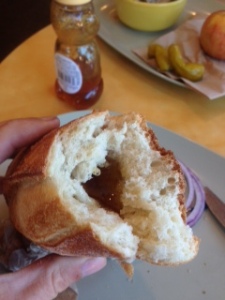 Post ride food, yes a bored out Baguette filled in with honey. It. Was. Awesome.

After another large breakfast, along with some harmony bars as snacks, race day morning, we picked up Gareth’s sister who was in town visiting a friend.  This worked out great as she was able to hand us water bottles (and did so perfectly, thanks!)  I downed one of Skratch labs hyper hydration packets about an hour before the start of my race and went through three bottles of pineapple during the race and managed to stay decently hydrated for how hot and dry (but still humid, it was weird) the Texas sun made it.

My call up was around 42nd out of the 70 person field, which I guess could have been worse.  There was a one mile start loop before entering the course for the first lap which had two seperate sections that went from a wide fire-road to singletrack.  I knew these were going to be major bottlenecks for my starting position, and can pretty much make or break your race.

Sure enough at the first singletrack entrance people were stacked up completely stopped!  I managed to ride a little off trail and pass a handful of people instead of stopping to wait around.  Then at the top of the second climb after everyone went 110% up it for positioning there was another backup, this one a lot worse.  There really wasn’t a good way around this one.  I hoped off my bike and ducked around some trees, and managed to take a dead branch to the face and split my lip a little.

Soon enough we were back on our way and entering the course.  I had no idea where I was at this point, but knew I needed to move up.  At this point I’m sure the leaders already had a good 2 minutes on the rest of the field because of the bottlenecks.  I was able to put in some hard efforts on the climbs and get around some more people.  I didn’t want to dig too deep this early because five laps of this course could completely wreck you if you are a little off.

I managed to get in with a good group for the second and third or so lap with Menso de Jong, Keck Baker, Cole Oberman, and Miguel Valdez.  But the last bit of climbing on the third lap was starting to wear on me.  The guys that had dual suspension bikes were just able to transfer a little more power to the ground and not get as beat up.  I had no problem hanging with them on the descents but the super bumpy flats and punchy climbs put a hurting on me.

I managed to finish 31st overall, which considering the field isn’t too bad.  I also took about 5 minutes off my time behind the race leaders from last year.  I know Ive got the fitness to start mixing it up with everyone, I just need to slowly start working on getting better callups(along with the 300 other pros in the country, ha!)

Considering how unforgiving and bumpy the course was the Tuned by Velo Hangar Focus Raven performed great.  I pushed that bike to its limits for the entire 1:40 on the most technical course of the season.   Like I mean I hammered the crap out of that bike and it handled everything with no problems. My two-year old ENVE wheels also got ridden as hard as I could push em with still no problems.  Also glad that I put on tires with more sidewall protection because I saw about 4 people flat yesterday, there were probably more!

That night we cruised over to Mellow Johnnys bike shop for some free grub while they replayed the race.  Then cruised around on 6th street in downtown Austin and scoped out the hundreds of bars and restaurants.  Austin is definitely a pretty rad little city, and with the bike race being so fun I will for sure try to make it again in the years to come.   Big thanks to Scott Tedro, Sho-Air, and all the volunteers and race organizers from TMBRA.

And an even bigger thanks to all my friends, family and sponsors for the support couldn’t do it without you guys! 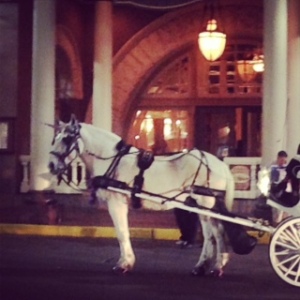 Cruising around 6th street, just a unicorn no big deal. 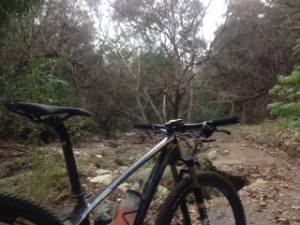 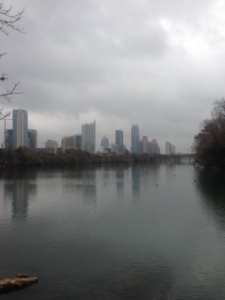 Riding around some trails that skirt along the Colorado river.