View from our camp spot

Ahh Yes…Sea Otter!  I have been wanting to go to this event since I worked in a bike shop 12 years ago, and this year I finally got the chance.  I somehow managed to swindle my way into camping with the Staitons, Geigers, and Geist’ who all had RV’s, I even scored a comfy bed in one and people were always making me food to eat, it was the best.  So first off huge thanks to Dave, Katrina, Kate, Len and Len, Brenda, Taylor, Tony, Laura, Mattie and Rudy for their hospitality!

Truck all packed up

I left at about 5 on wednesday morning, made it through LA pretty quickly and after about 6 stops to pee on the way up finally got there around 1:00.  Met up with Len, Dave and their families (since I would be crashing at their camping spots 🙂 helped Dave setup and park the RV he had rented and then quickly got out of there to go pre ride the course.  Was actually suprised out how tough the course was, it had super steep punchy climbs, long drainers, and some superfast flat sections.  We took it pretty easy the whole time and was suprised at how drained I was was when we were finished.

I also discovered that the used tire that I was talked into installing a day earlier for this race was actually way too worn down and I was sliding out all over the place.  So was really hoping I could find a vendor that was selling tires and get it inflated tubeless with a floor pump on thursday.  Sounded great I didn’t really have anything else to do except avoid the scorching sun.

I lucked out on thursday and scored a schwalbe Racing Ralph for $50, got the bead set with a floor pump and stans installed, stoked!  Did a longer than meant to be ride with Erik Dekold and tire held air and performed perfectly, sweet one anxiety factor out of the way.

The next morning, race day, I took it super easy and laid around most of the morning.  Finally Len and I decided to go watch the pro short track race, which was pretty cool almost like cyclocross minus the barriers and adding in more hills.  Man those guys (most of them at least) are FAST!  Had a blast watching them went to get on my bike to cruise back over to the campground and I had a flat!  Great, are you F**king kidding me.  My race goes off in 45 minutes and here I am walking my bike back over to our spot with a flat, the whole time I’m trying to figure out why it went flat, and passing back and forth in my head to try to inflate it and race tubeless or put a tube in it, AHHH!  This really stressed me out as I am getting geared up to race, not like I didnt have enough to think about aleady.  Finally at the last minute I decided to throw a tube in, no way I was gonna train this hard come this far only to get a flat the first three miles.

So tube in, warmed up and on the line in time for my start!  There was easily 35-40 people in my race, as I was eying everyone up I noticed I didnt really recognize anyone, sweet!  Got a pretty decent start and was the third one going into the first single track downhill, with no one at all on our tail, I am guessing someone flubbed the super punchy fireroad right beforehand.  After the first downhill and ascending the first ‘climb’ of the course the leader (Brandon Gritters) started pulling away from us, so as soon as the single track opened back up to fireroad I put in a good effort and reeled him right in.  We descended the next section together and I let him do all the work, and after the sandy chute we were all alone.

We took turns in the wind on the fireroad, pushing the biggest gears that we had, and I went ahead to lead the charge up the next ST climb.  Knowing that we had two laps I really kept the pace tame on this, even though I know I could have ridden away at any point.  Eventually near the top the third place guy caught up to me and gritters, we made him do some work at the top on the fireroad then jumped in front of him before the next singletrack descent, which lead to us dropping him again.  Lesson learned dont get behind that guy on a descent!

The third place guy eventually caught up to us again at the beginning of the next climb and once again took our turns at the front, until we got to the final climb out of the valley.  This is a brutal climb thats about five miles long and I somehow ended up taking first pull up the hill, and we started gaining and passing people left and right.  About halfway up Gritters made a strong jump, I let him go a little then sat in until we had about a mile left of the climb where I completely backed off.  I thought back to my original race strategy, and that was to go all out on the second climb of the SECOND lap, so I wanted to try to conserve some energy for that.  I watched the two of them battle it out the rest of the lap and was about thirty seconds behind at the bottle exchange point, which thanks to Erik (and Time for making crappy pedals) and Tony for the smoothest bottle hand off ever!

I put in some good work by myself happy for the time being, I was in podium potential and 4th place was nowhere in site, had to have at least 2 minutes on him at this point.  I caught back up to gritters and the other guy at the bottom of the sandy decent, grabbed onto a wheel for the fire-road and was preparing myself for my attack on the next climb where I was gonna make my move.  I started out a bit sluggish and slow on the climb, i had a plan to go at about the halfway point where there was a nice steep section, only when I got there I could barely clean the thing in my easier gears!  I had hardly anything left, crap!  I watched those guys ride away slugging it out with each other.

At this point I was still pretty stoked, 3rd isnt bad and I still had a shot of at least second, I knew the one guy was slow at going downhill so i pushed it a little harder than usual on a fire-road section and ended up running out of talent going about 25mph on a loose sand section.  My front wheel just kind slid out and I super-manned it like I was sliding into home at the world series.  I had so much adrenaline going that nothing hurt, took a quick inventory, limbs work, bike works, onward!  I probably only lost about 15 seconds on this but looking back I think this crash had a larger affect on me.  Once I started the long 5 mile climb out I was hurting bad, more so than usual because of being slammed on the ground, and started getting passed by people, some of them in my age group.  Knowing I couldn’t catch them cause I was done for I was ready to go for a DNF, but realizing I would have had to climb out on this hill whether I was racing or not I decided to finish.

I limped to the finish getting passed up by what felt like 100 people on the last climb and ended up with 8th.  Not super happy with my result but stoked with my performance, its a blast racing with other fast people and thats what I have been looking for!  Its also pretty amazing to see how far I have come with only about 5 months of smart training, thanks Trevor!  Had a great time at sea otter, but have still yet to see a sea otter at laguna seca, maybe next year if I drink enough beers! 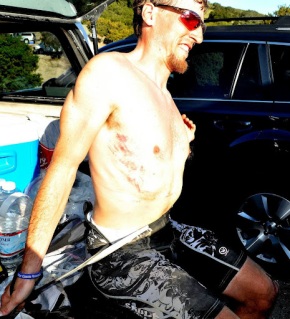 It was 366 days ago that I entered my 2nd race since my 12 year hiatus off the bike.  I was somehow talked into the Vision Quest race by my good friend Chas, and managed to transfer a spot at the last minute.  I had only been mountain biking again for about 4 months, most of the time on a single speed too, and I had never ridden over 40 miles, and there I was about to race 56 miles with over 11,000 feet of climbing.

For some reason when I started riding again I wanted to do these longer ‘epic’ races, looking back I feel a lot of people getting into racing are interested in this type of racing for the accomplishment of completing something great.  I got lucky and managed to finish the 2011 VQ top 20, and 1st in the single speed category, it was a great experience and I learned a lot.  I will never forget seeing Tinker and the lead group a switchback ahead of me on the first climb in the dark, it looked like they were doing 25mph uphill!  At that point I really kind of realized how slow I really was, and started to think what I could do to start riding faster.  Just ride more right, HA!
I did a few more races last year, with some decent results but just couldn’t figure out what it takes to start getting to that next level.  I recalled the first time Len told me he had a coach, Im pretty sure I laughed out loud at him.  A coach for mountain biking?  Seriously?
It didn’t take me too much longer to realize that I wanted to step up my game so there I was asking Len if I could get the number for his coach.  I have only been working with Trevor Glavin about 4 months and in about two weeks I’m about to race one of the biggest races of the year in Cat1 and am feeling pretty good about it.  I have been wanting to race sea otter since I worked in a bike shop 12 years ago, and now that I live in CA its a pretty feasible task.

Its pretty awesome to look back and see how far you have come in a year, what has changed and where you plan on trying to go.  I am super excited to keep working with everyone and see how far I can go, big thanks to everyone at this point!