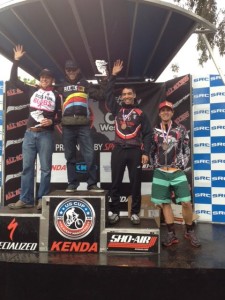 I dont know whether it was the multiple trailer parks we passed, the fact that there was a nascar race going on right down the street or the threat of rain I just couldn’t get over the fact that I was going to a mountain bike race in Fontanta, aka fontucky. The biggest thing on everyones mind on the way to the race was the rain, no one really likes to race in the rain, and no one could tell what was going to happen.

Len, Dave and I got up there with plenty of time to register, gear up, and check the weather report 10 more times. 40 minutes before the race we started our warmup and checked out some of the course, and we’re bummed to see the fact that ‘the elevator’ climb wasn’t included in the course this year, as that is all Len has been talking about for the past two weeks.

I toed the line with the 30-34 and 35-39 age groups, and while waiting around to start I realized how unmotivated I was for this race. Not really sure why, maybe it was the overcast skies, or being tired from last week but I really wasn’t feeling it, which was quite apparent in my start. The super fast 35-39 guys took off fast and I was sitting probably around 18th out of 25 or so in the group going into the singletrack, which is no bueno. The first climb is pretty narrow with basically no room for passing. It eventually opened up to a road where I noticed I was in about the third or fourth pack back. I put in a little harder effort and bridged the gap to the second pack but was still prob only around 10th overall between the two age groups.

The road eventually turned back into a single track climb and I finally started to settle in. Unlike normal races where if someone goes by me I stay on their wheel and eventually try to pass once they tire, I was more keen on letting people go by, as I knew it was only the first lap and we still had three to go.

The rest of the laps were pretty standard and I rode pretty much the same pace, managed to pick off a couple more riders and have fun on the technical course. I tried mixing some cola in my second bottle this time around and started pounding it on the last lap. I was feeling pretty good at this point, with some slight tingling in my quads as a warning sign of some possible cramping. About halfway through the last lap I ran into another guy in my category (he finished 3rd) and he thought we were right around podium potential, this kinda perked me up a little. As you have no idea who is in your category the whole time since no one got their legs marked. After I heard this I got a little fire lit under me, dropped him on the single track and caught another guy in front of me who also said he was in my age group, I asked him what about the guy in front of us? He said he was a pro and we werent racing against him. Perfect! At this point we were only about 2-3 miles from finish. I put in a good hard effort on the climb and got in front of the pro, which was good to keep the guy in my category a place behind.

I could see the another guy (1st place) not too far ahead down on the flats, and thought I had a good shot, and had about 30 seconds on the guys I just passed. I lost a little bit of concentration on a little rock drop and my front tire slid out, I was up and ready to go before the guys behind me caught back up, then I looked down and noticed my chain was off, NOOOOO! With the MRP guide I was running on my 1×9 its a bitch to squezze the cahin back through the guide and get the chain on the ring. I lost about a minute here and the three guys I just passed were now a good distance in front of me. I finally got going and managed to make up some time and hang onto forth and lost out on the podium by only about 8 seconds.

All in all it was a great day of racing and the heavier rain held off until the end. Dave S ended up with an awesome finish at 2nd place and Len G with a solid 4th which is pretty awesome considering he just had a broken tibia about a month ago. Lesson learned here, run a real geared crank and front derailleaur up front from now on!